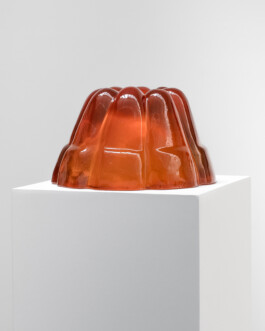 The sculpture, which is depicted in the shape of an oversized dessert jelly acts as a symbol for the absurdity of life and its very meaning. This absurdity becomes even more present in today’s current climate, in which over the past year the world, as we know it, has been brought to an abrupt halt and our lives have been changed forever.

For over a year now we’ve been confined in our homes, deprived of social interaction and the pursuit of the life goals we originally had in place.

The plans we had before had to be abandoned and instead many filled this isolated time with new hobbies such as cooking and making desserts to fill their life with some kind of meaning.

This period gave more time for personal introspection and questioning the previous meaning and actions of their life, which now seem as absurd as a jelly, which moves and shakes in unexpected directions with the ever so slightest touch from the outside.

Furthermore, the jelly which is immediately recognisable by its distinct shape, conveys a feeling of childlike fun and innocence. Yet, on a deeper level, it is closely connected to mortality and death as its primary ingredient is gelatine, which is made of animal collagen containing the remains of a dead animal’s bones and skin. Here our life was taken away from naive fun and innnocence and and a darker, more serious reality was revealed.

The jelly is super sized and the material plays with coloured epoxy resin which on the viewer’s first glimpse looks identical to a real jelly that one could dive into and take a bite of.